The Tom and Gertie Letters Project

In 1916 Tom and Gertie were teenagers—he was a new recruit in the Huron Battalion; she was his girlfriend, helping on the family farm near Whitechurch. They exchanged scores of letters while he was overseas during WWI. By chance, Tom’s long-lost letters were returned to his granddaughter, Donna. Rich in humour, tenderness, poignancy, bravado, and some anger in face of personal loss—they inspired her to create this staged reading. Through their glimpses of everyday life on the front and on the home-front in Huron County, the letters reveal Tom and Gertie’s discovery of home and love during wartime.

The long-lost letters of Tom Penrose, written during WWI to his girlfriend Gertie Middleton found their way to his granddaughter Donna, and then changed her life — they turned her into a theatre-maker. Before this, Donna worked as molecular biologist in leukemia research at Princess Margaret Hospital, and at the University of Waterloo where she investigated plant growth-promoting bacteria, i.e., how soil bacteria help plants. Along the way she raised two great kids, earned a doctorate in biology and indulged her passions for jam-making and gardening. She is excited to be sharing Tom’s letters at New Histories/ Old Roots 2019 in Huron County, home to Tom and Gertie during WWI. Donna lives in Stratford Ontario with her husband Ted McGee and Lily the cat.

Ted McGee, professor emeritus of the University of Waterloo, taught Drama and English courses there for over thirty years. Shakespeare’s plays—on page and stage—were his area of specialization. He served on the Board of the Stratford Festival for seven years and on its Education Committee for twenty-five. His publications on Stratford productions include articles on Juliet’s costumes, Canadian settings for Shakespeare’s stories, and the controversies stirred up by The Merchant of Venice. In 2013, for the Stratford Festival’s ‘Forum’, he wrote and presented, with Seana McKenna and Lucy Peacock, Dear Mary, Dear Elizabeth—a staged reading of letters exchanged by Queen Elizabeth I and her rival Mary Queen of Scots.

According to Donna, The Tom and Gertie Letter Project connects to New Histories/Old Roots ‘histories of home theme’ because, 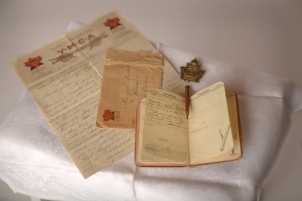 Tom Penrose’s ‘old roots’ were in England, but he found a new home Canada. That was not easy, for his father’s work as a Methodist minister required the family to move from one rural circuit to another. But eighteen-year-old Tom did find home in the village of Whitechurch, Ontario, because there he met sixteen-year-old Gertie Middleton, who would be his anchor and his soulmate. The Tom and Gertie Letters Project comprises the letters they exchanged during World War I. These letters—from the poignant departure from Halifax harbour, to Christmas in the camps, news of Gertie’s life on the farm, the loss of his brother in action, and the anticipation of a return home—reveal the growth of their love and their shared commitment to a new history.

Get your tickets now!