Last December, Think Arts and students from schools across Kolkata, India, opened a temporary exhibition at the South Park Street Cemetery. In the coming weeks, a new batch of students will have the opportunity to bring history to life in their own way in the same space. Read on to learn more about the project. (Feature image photo credit: Nazes Afroz)

The South Park Street Cemetery in Kolkata is one of those iconic spaces in the postcolonial world that whispers to passersby of a very different time and place. The weathered, mossy stones now interrupted by trees and plant life that have had centuries to stretch their limbs invite you see the cemetery as an artefact of the past with little bearing on the bustling city outside its walls. Though largely forgotten by residents of Kolkata, it still has a pull for some people, like Ruchira Das. “Every time I visited the South Park Street Cemetery in Calcutta, I have been moved by the gravity of the place. Not having grown up in Calcutta, I discovered this fascinating place quite by accident, during one of my visits to the city.”

But Das, founder of Think Arts – an organization geared to engage children with the world around them through the arts, in unconventional ways – was also keenly aware of the kind of history that the cemetery represented in the city’s past. “After I moved to Calcutta a few years ago,” she writes, “I got a chance to spend a lot more time at SPSC and was struck by the fact that the cemetery was in use during one of the most interesting periods of Calcutta’s history (1767 – 1830) – it was during this period that Calcutta was named the capital of British India, the Asiatic Society was founded, the Bengal Renaissance took its roots and the city saw several such significant events.”

Upon realizing that many of the city’s residents, including children like those at a school just a couple hundred meters away from the cemetery, had never entered the space, Das approached the Christian Burial Board, under whose management the cemetery fell.  The board mirrored her concern about the lack of public engagement with the space. 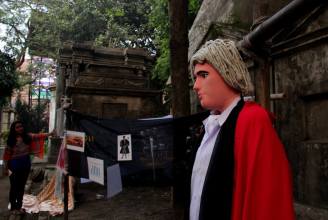 “Paradoxically enough, it was in a cemetery that the pages of history came alive for all of us.”

Das proposed a project wherein school children would spend six months researching and exploring the narratives buried in the site to develop an exhibition called ‘Our History, Their Times.’ The project was designed to encourage students to think about the spaces and stories that surrounded them through art forms they were familiar with: “Retracing a city’s history and presenting it using their [students’] forms of expression can be an involved, exciting activity with a tremendous scope for learning – learning outside textbooks.” For Das, the installations, which ran from the 7th to the 13th of December, 2015, represented a critical understanding and response to the histories to be found in the South Park Street Cemetery – an engagement that was as much about the form as the content in the physical pieces themselves. This emphasis on the value of art as an active site of learning is something Das believes in firmly, and was a driving factor behind the project. In her concept note on the project, she expressed a need to ensure “that the youth is involved in critical thinking – of investigating history, discovering stories, examining perspectives and questioning the accepted.”

The students, grades eight to eleven, came from schools across the city. They were captivated by the romance of the cemetery from the start. Reflections on their first visit to the site highlighted the picturesque beauty of the space, but also revealed a curiosity of the stories that lay behind tombstones and beneath their feet. “I thought that the cemetery was exquisite, but beauty certainly isn’t skin deep,” wrote one student. “The visit gave me the opportunity to make my way deeper into the stories of the people who lay there, and introspect on the lives that once were. It certainly had a great impact on me.”

The project was a huge success, both among participants and with members of the general public who poured visited the exhibition last December. Over the six months of the project, students explored the histories of individuals associated with and interred at the site, as well as those of the nameless Indians and Europeans who lived in Calcutta during that period. Working in groups with help from visual artist Nobina, and professor of English, Dr. Sudip Bhattacharya, students produced a number of different responses to the space, and explored various themes to bring the history of their city to life within the walls of the cemetery. Sunita Biswas, a teacher at Modern High School for Girls was as enthusiastic as her students about the project: “It’s been a wonderful learning experience for the entire team…teachers and students. It gave them a better understanding of Kolkata and its past. Paradoxically enough, it was in a cemetery that the pages of history came alive for all of us.”

Thanks to Ruchira Das and her students, the South Park Street Cemetery was bustling with live bodies for the duration of the exhibition, which brought in residents of the city from all walks of life who were curious about the colourful displays scattered between the trees and tombstones. “Our History, Their Times” was such a success that the Christian Burial Board has asked Das to facilitate the project again this year with a new group of schools. They will be starting their research and work on their projects in the coming weeks, and open up the cemetery gates for a second exhibition in December, 2016.

You can learn more about Ruchira Das and her organization, Think Arts on her Facebook page, http://www.facebook.com/thinkartskolkata/.